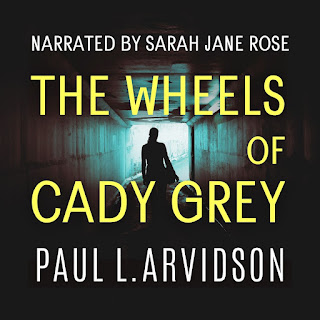 Get in the way of ruthless people and it’s gonna get you killed.

“Forget all you know about disabled people. This novel will blow everything you knew out of the window. A story of strength, intelligence, love and disability.”

Cady Grey is invisible. One of the ‘perks’ of being in a wheelchair. Sometimes it’s better that way, ‘specially when you’re a sweary, spitty teenage girl who’s main aim is getting through high-school in one piece. But when a sinister shell company wants to knock their school down and is prepared to stop at nothing. Cady and her friends are the only ones invested enough to care and smart enough to investigate. Regardless of the danger, Cady finally gives up being invisible to fight. And she discovers that getting in the way of politicians and their schemes might just get her killed.

“Cady, with spark, snark and enthusiasm will capture your heart in such a way you will want her to be your best friend. She is a voice, hero and visibility for a young disabled generation, a guide for us all and a mystery to solve. Grab your copy of a thriller unlike any other!”

Paul Arvidson is a forty-something ex lighting designer, now SFF author who lives in rural Somerset, UK. He spends his non-author time bringing up his children, fighting against being sucked in to his wife’s chicken breeding business and preventing Morris the Dashund contributing to his typing. His SFF works form ‘The Dark Trilogy’. Dark is the first book in the trilogy and came out in 2017. The sequel Darker came out in 2018 and the series will be completed by a final book in 2019. There will not be a prize for guessing its title.

I trained as an actor in London and spent almost 30 years in the Theatre. During that time I also worked in the Wine Trade with restaurants and sommeliers to create great wine lists. I always tried to keep my two lives separate, but for 2021 I am bringing my two worlds together in perfect balance. I am not two people, I am one person who works as a narrator and voice actor, as well as a wine consultant. Join me this year as I am embark on Wine and Words, a place to bring together my two favourite things. I will be providing live feeds and online events about books and wine, follow me on Instagram for regular updates and live feeds @sarajaneroseuk.

Join us for the #AudioBook Tour