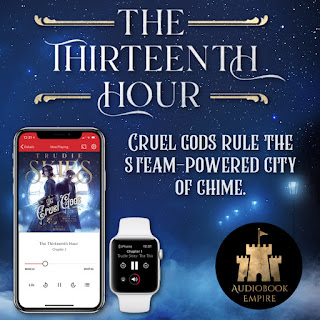 WHEN THE SAINTS FAIL, THE SINNERS STEP UP. Cruel gods rule the steam-powered city of Chime, demanding worship and tribute from their mortal subjects. Kayl lost her faith in them long ago, and now seeks to protect vulnerable and downtrodden mortals from their gods’ whims. But when Kayl discovers powers that she didn’t know she had—and destroys a mortal’s soul by accident—she becomes Chime’s most wanted. Quen’s job was to pursue sinners, until the visions started. Haunted by foreboding images of his beloved city’s destruction, Quen hunts soul-sucking creatures made of aether who prey on its citizens—and Kayl is his number one target. To ensure Chime’s future, Kayl and Quen must discover the truth of Kayl’s divine abilities before the gods take matters into their own hands. For a city that bows to cruel gods, it’ll take godless heathens to save it. The Thirteenth Hour is the first book in The Cruel Gods series—a gaslamp fantasy featuring magical portals, gothic cosmic deities, quaint Britishisms, and steampunk vibes. This is an adult book containing strong language and mature themes that some listeners may find disturbing. For a full list of content warnings, visit Trudie Skies's website.

Trudie Skies has been living inside fantasy worlds ever since she discovered that reality doesn’t quite live up to the hype. Through the magic of books, she wishes to share these worlds of hope and heroes with other weary souls. Living in North East England, Trudie spends most of her free time daydreaming about clouds, devouring whatever fantasy books or video games she can get her hands on, and chasing after her troublesome dogs, who would like to reassure you they are very good boys. Her debut YA fantasy series, Sand Dancer, was published through Uproar Books. Trudie is now writing adult gaslamp fantasy with her new series, The Cruel Gods.

An accomplished full-time voice actor and audiobook narrator with 4 years of experience. RJ’s voice has been described by peers as a ‘well-weighted baritone, balanced & deep at the same time.’ Natually he’s got a mild Yorkshire lilt that’s trustworthy and relatable. He’s extremely adaptable however and capable of many convincing accents, or anything you throw at him really. RJ’s broadcast quality studio consists of a fully acoustically treated room, RØDE NT-1A microphone, Reaper digital audio workstation and Izotope RX7 for clean-up and mastering for that high end sound. So far he’s narrated over 30 audiobooks with more currently in production. As a VO he’s been the voice of brands such as Nickelodeon, Johnson and Johnson, Network Rail, Aegon, Accord and more. He’s friendly, reliable, professional, takes direction well and always makes sure you’re happy with your narration. He maintains he’s not trying to ruin his own career by deafening himself with heavy metal on his dog walks.

At Audiobook Empire, audio reigns supreme, narrators are hailed as heroes, and headphones are worn with pride. Marrying pomp and circumstance with quality you can count on, Audiobook Empire is a full-service production house that produces and promotes audiobooks with gusto. Give your audiobook the imperial treatment by producing it with Audiobook Empire.

First off, I want to rave over the narrator -
He brought the characters to life
I could still hear his voice long after the story ended (the little lilt to the word Chime lol)
Now the story -  be prepared to take a journey down that rabbit hole of possibilities
Waaaayyyy down
In a world where those in authority have complete control
Of your thoughts and your body
Even those who are supposedly "policing" the various dominions of Gods/Leaders to ensure fair treatment of the populace are trapped in the web of deceptions
Kayl fights for the freedom of the godless. She has a few secrets that may turn the tides in their direction.
Quen is a warden who has been tasked with rounding up those who transgress and returning them to their gods for proper punishment
This was one of the most vividly detailed and unique universes - the author spared no detail.
The storytelling was engaging, brought me in, and made me believe I was a part of it. It was packed with little bread crumb trails that at times are meant to misdirect, gave me a false sense of serenity - corruption was pretty wicked
Edge-of-your-seat suspense, mystery, angst, and light romance
An evocative cast that will endear themselves to you - capturing your heart and your support most of the time - there are many who will have those little hairs standing up in warning
Solidly recommend to those who enjoy gaslamp fantasy
Looking forward to the next in series
I received this audiobook as part of my participation in a blog tour with Audiobookworm Promotions. The tour is being sponsored by Audiobook Empire. The gifting of this audiobook did not affect my opinion of it.

Join us on the #AudioBook Tour with Bonus Material