A Fallen Hero Chronicles of Avilésor: War of the Realms a Fantasy by Sara A. Noë ➱ Audio Book Tour 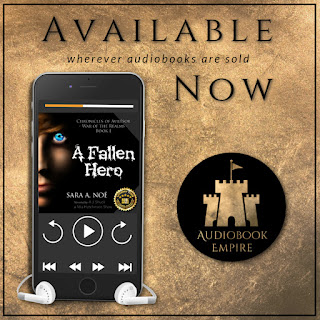 Series: Chronicles of Avilésor: War of the Realms , Book 1

Cato is the only true half-human, half-ghost hybrid in existence. He's powerful and unique with two divine powers instead of one. The United States government believes he is the key to developing a devastating weapon that will give humankind an advantage when war inevitably erupts between the Human Realm and Avilésor, the Ghost Realm. After being an unwilling test subject in Project Alpha for two years, Cato and the rest of his "lab-family" survive a transport accident to find themselves stranded and powerless in the middle of the wilderness. Hunted every step of the way by ghostly Shadow Guards with supernatural abilities and human Agents desperate to recapture their prisoners, the eight young fugitives are drawn to Cato's hometown where the Rip between Realms connects the worlds. Cato wants nothing to do with his past, but as his enemies close in, he realizes he's willing to do anything to protect his lab-family . . . . . . even kidnap the daughter of a ghost hunter and make a dangerous deal to become a mercenary.

Sara A. Noë is an award-winning author, artist, and photographer. She has had poetry, short fiction, and memoir works featured in various anthologies and journals since 2005, and her poetry is now available in the Indiana Poetry Archives. Notable art achievements include her photograph "Aftermath" published on the cover of Voices Literary Journal in 2018, photograph "Spiraling" awarded Best Still Life in a 2019 juried gallery exhibit, and charcoal artwork "The Raven" displayed in the Uptown Arts District of Michigan City, Indiana. A Fallen Hero, the first novel in the Chronicles of Avilésor: War of the Realms series, was published in 2018 and has been critically acclaimed by NAM Editorial, The Prairies Book Review, Literary Titan, and Chronicle Focus Editorial, among others. The novel made book reviewer Lauren Gantt's list of Top 10 Favorite Books of 2019 and won the Literary Titan Gold Book Award in 2020. The series sequel, Phantom's Mask, was released in July 2020 and won the Literary Titan Gold Book Award less than two months after its release. As an artist, Sara creates her own covers and graphics. She lives in a little cottage with her calico cat, Calypso, who has a fondness for chewing pens and being as loud and sassy as possible.

A.J. Shuck is an Audiobook Narrator and Producer with 3 years of experience in Audiobooks and more than a decade of experience in stage acting and musical theatre. He fell in love with performing at the age of 13 when he premiered as Nerd #3 in a local production of High School Musical. He has a passion for books and reading especially YA Fiction and Mysteries. He believes strongly that the right words at the right time can change the world, certainly, they've changed his world. He is a proud member of the APA (Audio Publishers Association). He currently lives in Oklahoma City with the love of his life and their 3 beautiful daughters who have him wrapped around their little fingers.

Mia Hutchinson-Shaw is an actor and narrator based in NYC. Mia creates soulful, saucy, and lovable characters with her arsenal of accents and flare for the fun. Mia comes to narration with her background in classical and period-drama theater Off Broadway and Regional Stages. She trained in the UK at the Royal Conservatoire of Scotland, BA Acting with Honors (UK Equivalent to BFA) and was raised between Massachusetts and Montana. When not working as an actor, Mia is thrifting for her next outrageous, colorful clothing item, getting on her soap box about low-waste living, or hunting handmade jewelers for a new item for her collection of giant earrings. Her favorite is a pair of hot pink Galahs (a bird from Australia).

At Audiobook Empire, audio reigns supreme, narrators are hailed as heroes, and headphones are worn with pride. Marrying pomp and circumstance with quality you can count on, Audiobook Empire is a full-service production house that produces and promotes audiobooks with gusto. Give your audiobook the imperial treatment by producing it with Audiobook Empire.

Why Did You Decide to Turn Your Book into an Audiobook?

I want my stories to be discoverable and accessible to everyone, regardless of personal taste, convenience, time limitations, travel, or physical restrictions. Personally, I always prefer to read print books. There’s something about holding an actual book in my hands, turning the pages, being able to flip back to earlier sections, and visually seeing my progress (and how many pages are left) that completes the experience for me. My imagination takes hold, and I’m fully immersed. Also… the smell of books. Fellow bookworms know exactly what I mean! But publishing is about more than my own personal tastes. Even though I don’t read ebooks myself, I know that’s a format many people enjoy. I can certainly see the appeal of having your entire library digitized in one convenient device that’s easy to store and carry. For this reason, I always release my books in hardcover, paperback, and ebook options to cover all bases. I want readers to be able to enjoy my stories in whichever format they prefer. Audiobooks are a separate, rapidly growing market. As much as I wanted to release A Fallen Hero as an audiobook so every format option was available to readers, that wasn’t feasible early in my writing career. Audiobooks are expensive to produce, especially when hiring a good narrator. I knew recording the audiobook myself wasn’t ideal. I didn’t have the time, training, experience, equipment, recording space, vocal range, or editing software to produce a high-quality audiobook. I needed to save up and hire a professional who could handle various character voices and read the book in a compelling, entertaining way. Thanks to the Indiana Arts Commission, I recently received a state grant as part of the On-Ramp Creative Entrepreneur Accelerator program. This phenomenal opportunity broke down the financial barriers for me and finally opened the door to an audiobook. I’m so excited to tap into the audiobook market and open my story up to new readers who need or prefer audio! Not only do audiobooks provide an opportunity for people who are visually impaired or simply don’t have time to sit down and focus on a book, but they also change how people experience the story when a talented narrator puts on a performance. Partnering with Audiobook Empire, A.J. Shuck, and Mia Hutchinson-Shaw to make this project possible was such an insightful learning experience! I really didn’t know what to expect with the audiobook, and I’m so amazed and impressed by how my extremely talented narrators brought the characters and story to life with unique voices, dramatic storytelling abilities, and pure passion for what they do. The first time I listened to the audiobook, I found myself on the edge of my seat, waiting for the next chapter even though I knew what was going to happen next in the story. They elevated A Fallen Hero to a whole new level, and I can’t wait to share this new rendition of the award-winning book with the world!

I received this audiobook as part of my participation in a blog tour with Audiobookworm Promotions. The tour is being sponsored by Audiobook Empire. The gifting of this audiobook did not affect my opinion of it.

Join us on the #AudioBook Tour with Bonus Material