Love and Other Sins Contemporary YA Romance by Emilia Ares narrated by: Karissa Vacker, Will Collyer ➱ Audio Book Tour 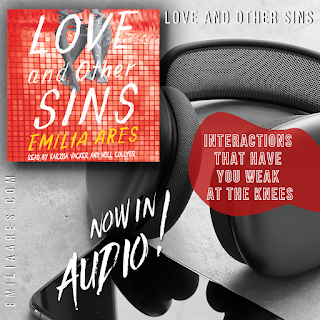 Mina’s life is going according to plan; she’s acing AP Calc and is perfectly content with her nonexistent social life. Though only a high school junior, Mina knows time is an investment, and she’s putting all her capital into academics. Oliver, a child abuse survivor who grew up in the foster care system, is ready to burn down his old life and start from scratch - complete with a new name and emancipation papers - in LA. When the two are thrown together through circumstance and develop an unexpected connection, they discover how hard it is to keep the past in the past. Content warning: sexual assault, recollections of child abuse, discussions of suicidal thoughts, and mention of miscarriage. 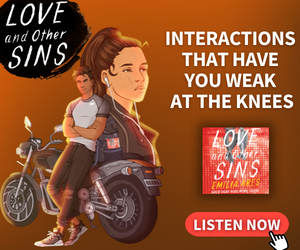 Emilia Ares is an American film and television actress known for American Horror Story (2011), NCIS (2003), Bosch (2014), and Follow Me (2020). Love and Other Sins is her debut novel. She graduated UCLA with a BA in Economics, and a minor in Russian. Literature and storytelling have always been her true passion.

Karissa is an Audie Award Finalist and AudioFile Earphones award winning narrator based in Los Angeles by way of Texas. She is a classically trained actor with credits from major regional theaters and also enjoys a career in film and TV. Karissa has narrated over 100 books in-studio for Penguin Random House, Hachette, Brilliance, Tantor, Dreamscape, Harper Collins and Scholastic, among others. She excels at narrating YA fiction, women's fiction, and suspense/thrillers.

Will Collyer, an AudioFile Earphones Award–winning narrator, is a film, television, and stage actor. He has starred in television shows such as Melrose Place, Charmed, CSI: Miami, and Boston Public, as well as numerous films and plays. He holds a BA in theater arts from the UCLA School of Theater, Film, and Television.

Audiobook Accessibility and the Problem with Audible Exclusive

When releasing my Love and Other Sins audiobook, I faced the decision of how to go about distribution. I had to choose between exclusivity with Audible and a higher revenue percentage or wide distribution with a platform like Findaway Voices and a lower revenue percentage. Suppose I decided to go exclusive with Audible. In that case, I’d receive codes that reviewers could use to listen to my audiobook and then review it on Audible, which is still considered the dominant platform for audiobooks in terms of reach. Additionally, Audible has added this aggressive caveat that authors no longer receive any codes if they have not signed up for Audible exclusively, which sucks, of course. The other option was to release the audiobook wide through Findaway Voices so that Love and Other Sins would be available everywhere and for everyone. Ultimately, the decision was easier than I initially believed when I remembered my priorities. My goal for the book has always been for it to be read and heard by as many people as possible. I wanted my books to be accessible to everyone, especially readers with disabilities who relied on libraries to check out their audiobooks or Libby or those who support their local indie bookshops through Libro.fm. So, I decided not to be exclusive with Audible to ensure that libraries could carry my audiobook if they chose to do so. I encourage other authors to do the same and not put a paywall between their audience and their book. I understand and appreciate that it is far more challenging to get audiobook reviewers to listen in exchange for reviews without Audible exclusivity, but this is slowly changing. To me, the accessibility factor is well worth the struggle. Much can be said about the aggressive capitalistic strategies of these digital platforms as of late. Still, we can change things by making active choices to collectively fight monopolies by opting for wide distribution and sacrificing short-term visibility and revenue for long-term autonomy and freedom of choice.

Join us for the #AudioBook Tour