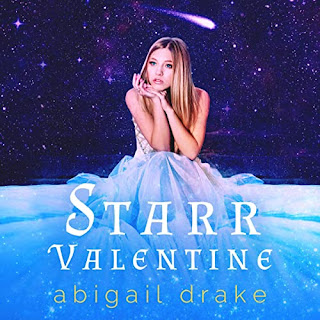 Starr Valentine, the most popular cheerleader at Middleton High, has led a charmed life. But the day she is chosen as the youngest member ever of homecoming court, is also the day her parents reveal a secret more than a decade old: They are monarchs in exile from a mysterious planet called Vega, and it’s time for all of them to return home. Best day ever, ruined! While she likes the idea of being a princess, Starr realizes something is terribly wrong when they arrive on their new world. She’s always been the best-looking girl in the room, but everyone is ignoring her and fawning over her frumpy older sister, Astra, and it doesn’t make sense. Although Astra is the sweetest person around, she’s never even had a date. So why is she now getting all the attention? Starr soon figures out the awful truth. The standard of beauty on Vega is different, and Starr isn’t pretty anymore. To make matters worse, everybody treats her like she’s annoying and shallow, including an irritatingly handsome young duke named Julian. Can Starr find a way to get noticed again, or is this once beautiful swan doomed to remain an ugly duckling forever?

Abigail Drake is the award-winning author of seventeen novels, but she didn’t start her career in writing. She majored in Japanese and economics in college, and spent years traveling the world, collecting stories wherever she visited. She collected a husband from Istanbul on her travels, too, and he is still her favorite souvenir. Abigail is a coffee addict, a puppy wrangler, and the mother of three adult sons. She writes contemporary romance, women’s fiction, and young adult fiction, and has taught workshops for many different writing organizations. In her spare time, she blogs about her dog, Capone, and teaches writing classes for children at her local library. In 2019, Abigail was awarded an honorable mention for her book "Love, Chocolate, and a Dog Named Al Capone" in the Writer's Digest Self-Published E-book Awards. She is the winner of the 2017 Prism Award for her book "Traveller", the International Digital Award for her young adult novel, "Tiger Lily", and the Stiletto Contest for "Love, Chocolate, and a Dog Named Al Capone." In addition, she was named a finalist in the Golden Pen, the Golden Leaf, the Dante Rossetti Book Award, and the Cygnus Award for Science Fiction and Speculative Fiction. Abigail is represented by Lauren Bieker of FinePrint Literary Management and she is the cofounder of Romancing Your Muse (www.romancingyourmuse.com). For more information, visit her website at www.abigaildrake.net.

Kasey Miracle has been in productions since she was a child. In college, she performed in plays and musicals (including MacBeth, The Mouse Who Roared, Rent, Wicked, The Glass Menagerie and more). She wrote award winning scripts for commercials and helped create backgrounds and sound effects in her spare time. After college, she taught Computers in an Elementary School, was an Elementary School Librarian and helped with sound and visuals in Chapels, Productions, and Events. She was thrilled to help host the first STEM Competition in her city. When she became a mom to an amazing, Autistic, little boy, she altered her course to voice over so she could be with him while also helping others like him enjoy works that they may not be able to read easily. She is passionate about her work and does her best to make the entire process as hassle free as possible! She gives her absolute best to every single project, no matter how big or small!

I received this audiobook as part of my participation in a blog tour with Audiobookworm Promotions. The tour is being sponsored by Abigail Drake. The gifting of this audiobook did not affect my opinion of it.