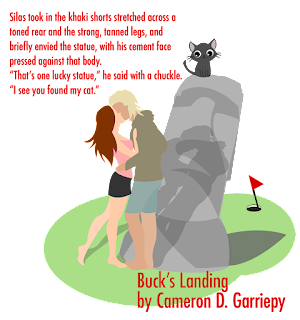 Summer always ends. Love doesn’t have to. Sofia Buck fled Hampton Beach a decade ago, never looking back until her father’s untimely death forces her to return for the summer to deal with the family business. Her one goal: sell Buck’s Landing so she can move on with her life. Silas Wilde believes in serendipity, especially when it brings an irresistible woman into his life. He’s certain they belong together, and sets out to convince Sofia to give him—and Hampton—a chance at forever. Rediscovering the magic of her hometown with Silas tempts Sofia with a future she never imagined—if only she can let go of the past that waits around every corner.

Cameron D. Garriepy attended a small Vermont college in a town very like Thornton. She's missed it since the day she packed up her Subaru and drove off into the real world. Some might say she created the fictional village as wish fulfillment, and they would be correct. She is the author of the Thornton Vermont series, and the founder of Bannerwing Books, a co-op of independent authors. Prior to Bannerwing, Cameron was an editor at Write on Edge, where she curated three volumes of the online writing group's literary anthology, Precipice. Cameron appeared in the inaugural cast of Listen to Your Mother - Boston, and irregularly contributed flash fiction to the Word Count Podcast. Since her time at Middlebury College, Cameron has worked as a nanny, a pastry cook, an event ticket resale specialist, an office manager, and a content writer. In her spare time, she cooks, gardens, knits, reads avidly, and researches hobby farming. She writes from the greater Boston area, where she lives with her husband, son, a pug puppy, and four hens.

Amy Jo Steele is a classically trained actor who studied theatre at the American Academy of Dramatic Arts NYC, and the New York Acting Conservatory for film acting. She grew up in New Jersey and Pennsylvania and after living and learning in New York, she made the move to Los Angeles. She continued doing theatre but focused more on film work. She studied and performed at Upright Citizens Brigade and was part of a small comedy production group where she first experienced a bit of voice-over work and short story narration which she found an instant love for. When Covid inspired the need for more indoor activities, discovering and stepping into audiobook narration was a perfect and very rewarding solution. One she hopes to continue and evolve in regardless of the state of the world.